Fill out the form below and we'll contact you and answer all of your questions. 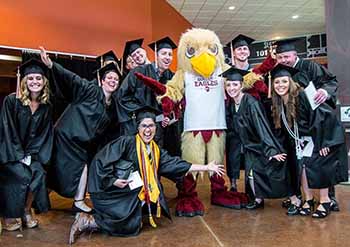 More than 1,100 graduates from across the country and the globe accepted their diplomas – either virtually or in person — at the 2017 CSU Global Commencement Ceremony on the morning of June 10. Two hundred remote graduates heard their names called and had their degrees conferred from as far away as the United Arab Emirates, the Philippines, Saudi Arabia, Turkey, and Canada.The U.S. was represented by graduates from 47 states.

The event, held at the 1STBANK Center in Broomfield, CO, was filled almost to capacity with a record-breaking 900 graduates and 6,200 family members and friends. “The feeling was electric,” said Stephanie Protsman, the event organizer and CSU Global registrar. 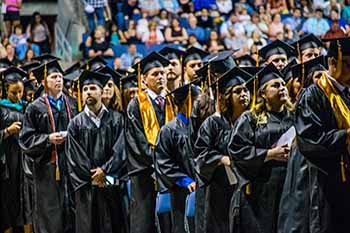 In her speech Kalisha Richard, student speaker for the CSU Global Class of 2017 said, “Some of us are the first in our families to obtain our degrees. Others are adding to the family count. Now, when we tell our children the importance of education, they will believe us. Because we did it.” Quoting Ralph Waldo Emerson, Ms. Richard concluded her address with the words, “Do not follow where the path may lead — go instead where there is no path and make a trail.”

“Please know that we need your talent and your energy now, more than ever. I know that you are well prepared to go out and change the world.” Dr. Hunter Reed acknowledged the daunting hurdles confronting nontraditional students in pursuit of diplomas, saying, “Many of you have overcome challenges and obstacles to earn this valuable degree. We applaud the determination and focus that has brought you to this moment.”

In conclusion, Dr. Hunter Reed offered a compelling call-to-action for the Class of 2017. “I ask you graduates to use your knowledge in service to others.” Quoting Ghandi, she said “The best way to find yourself is to lose yourself in service.”

Keynote speaker Tony Marlow, president and head of field marketing for Yahoo, and CSU Global advisory council member, congratulated the class on graduating and marveled at their sacrifice in achieving their goals as working adults.

Marlow discussed a new era of change and technological innovation, saying “You are the beneficiaries of a more innovative system than I was used to. The pace of change is not slowing down, it’s accelerating.” He emphasized the need for a willingness to embrace innovation, saying “Do not fear change. Embrace it. The status quo is far, far more scary than change could ever be.”

After briefly describing new research regarding the brain and neuroplasticity, Marlow emphatically stated, “As you pursue your life missions, don’t forget that it is never too late to be the best version of yourself.” He then took a selfie with the graduates in the background.

After the messages of advice and inspiration, for more than an hour CSU Global President and CEO Dr. Becky Takeda Tinker and CSU Global Provost and Executive Vice President Dr. Jon Bellum conferred bachelor’s and master’s degree diplomas on the 1,100 graduates — both in-person and virtual. Afterward, Protsman said, “For me, watching those graduates accept their diplomas made every day of the last 12 months of planning worth it — it was thrilling and gratifying.”

Ready to Get Started? Learn More